Musselburgh: – A burgh of Regality

Musselburgh’s connections with royalty stretch back through the centuries. It was back in 1020 when the Lothians were formally ceded to the Scottish king and the Ecclesia de Mususkilburgh, dedicated to St Michael, passed under the jurisdiction of St Andrews.

During the eleventh century, a charter of Malcolm Canmore (King Malcolm III), gifted the manor of Little Inveresk to the monks of Dunfermline. This was confirmed by another charter of David I, who added to it the manor of Great Inveresk or Musselburghshire, including Musselburgh, Fisherrow, Inveresk Church and their pertinents.

In 1201 the barons of Scotland assembled at Muschelburgh to swear fealty to the infant son of William the Lyon, afterwards Alexander II, who in 1239, granted additional powers to the abbots of Dunfermline under which the burgh had all the privileges of a burgh of regality. 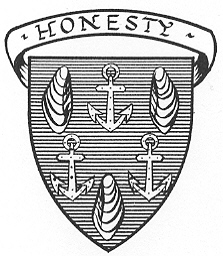 annual election of the Honest Lad and Lass. The town motto “Honestas” dates back to 1332, when the Regent of Scotland, Randolph, Earl of Moray, died in the burgh after a long illness during which he was devotedly cared for by its citizens. His successor offered to reward the people for their loyalty but they declined, saying they were only doing their duty. The new regent, the Earl of Mar, was impressed and said they were a set of honest men, hence “Honest Toun”.
Mary Queen of Scots:

James V made a pilgrimage on foot from Stirling to the chapel at Loretto (in Musselburgh) in August 1536, in order to procure a propitious passage to France where he was sailing in search of a wife. He was eventually to marry Mary of Guise and their daughter, who was to become the infamous Mary, Queen of Scots. also had links with Musselburgh.

In the last years of his reign, King Henry VIII tried to secure an alliance with Scotland by the marriage of the infant Mary, Queen of Scots to his young son, the future Edward VI. When diplomacy failed, he launched a war against Scotland, known as the Rough Wooing. The Battle of Pinkie Cleugh was part of this conflict and took place on the banks of the River Esk near Musselburgh on 10 September 1547. It was a catastrophic defeat for Scotland and became known as Black Saturday.

On the 15th June 1567, after a reign surrounded by conflict and intrigue, Mary Queen of Scots surrendered to the rebel confederation after the Battle of Carberry Hill, near Musselburgh. It was from Carberry Tower that she was taken to Fotheringhey where she was executed on the orders of her cousin Queen Elizabeth I in 1587

A Royal Burgh?
Musselburgh became a royal burgh in 1632 by charter of Charles I, albeit very briefly. In the same year, wanting to maintain control over the area’s trade, the magistrates of Edinburgh obtained a decree reducing it back to a burgh of regality.

Musselburgh also has links with Bonnie Prince Charlie. In 1745, he marched his army through the town over what is now known as the “Roman Bridge” on his way to the Battle of Prestonpans where he and his troops gained victory over the government army loyal to the Hanoverian George II. 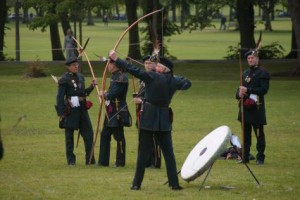 Another Royal connection is through the Royal Company of Archers. This is the Sovereign’s personal Body Guard in Scotland, although its duties are now purely ceremonial. Originally formed as an Archery club, shooting remains an important and integral activity today. The Royal Company of Archers parade annually through the streets of Musselburgh to compete for the Silver Musselburgh Arrow which is claimed to be the oldest sporting trophy in the world. The competition has taken place every year on Musselburgh links since around 1603 with the members of the Company dressed in their distinctive uniform which features a Balmoral bonnet with the Royal Company’s badge and an eagle feather.

A more recent and peaceful royal association with Musselburgh and particularly Carberry Tower comes with Queen Elizabeth, the Queen Mother who was born, Elizabeth Angela Marguerite Bowes-Lyon on the 4th of August 1900. The Lady Mary Frances Bowes-Lyon, an elder sister of Queen Elizabeth, the Queen Mother, married Sidney Elphinstone, 16th Lord Elphinstone who inherited Carberry Towers. The two sisters were very close; Lady Mary’s oldest daughter was one of the bridesmaids at Lady Elizabeth’s wedding, and she made regular visits to Carberry Towers.  When King George VI and Queen Elizabeth, visited Holyrood Palace, the then Queen would bring her daughters, the princesses Elizabeth and Margaret, to stay at Carberry. As Queen and also as Queen Mother she visited Musselburgh several times.

As part of the coronation visit to Scotland in 1937, King George VI and Queen Elizabeth visited Musselburgh races.
On the 10th of August 1956, the Queen Mother and her sister Lady Elphinstone became the first women burgesses of the town. The same day, amongst other engagements she witnessed the Riding of the Marches. She also opened the new Pinkie St. Peters primary school.
In June 1971 the Queen Mother opened the Brunton Hall.

Lady Mary’s daughter, the Hon. Margaret Elphinstone, the first cousin of Elizabeth II, was lady-in-waiting to her aunt the Queen Mother from 1991 until the latter’s death in 2002. She has written her autobiography – “The Final Curtsey” and it recounts her life as a member of the Scottish aristocracy including her time with the Queen Mother.

Queen Elizabeth II:
The most recent and perhaps the most impromptu Royal connection occurred on 14th July 2010, when Queen Elizabeth II and Prince Philip landed unannounced on Musselburgh links, after apparently encountering fog which caused them to abort their helicopter ride to Holyrood where they were hosting a garden party. Unlike Mary Queen of Scots who allegedly played golf there more than 400 years previously, the Queen did not partake of a round! 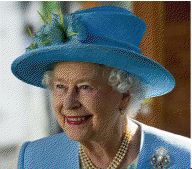